In writing about the development of written language in children aged 7 to 14, Andrew Wilkinson, a pioneer in this area, made the comment that

The problem rests in a lack of common agreement about just what is meant by ‘development’ in writing, which has in turn led to disagreement about what counts as effective pedagogy in writing.

If teachers and researchers disagree about what it means to improve in writing, they might be expected also to disagree about how such improvements might be fostered in schools and classrooms. Several studies have indicated that the writing experiences of many pupils in British primary classrooms in the mid 1990s were ‘fragmentary and discontinuous’, and that there was little evidence of progression in teaching or an awareness by teachers of appropriate developmental expectations.

The purpose of the research described here was to try to disentangle the multiple strands of current research and pedagogy in writing, in order to move towards a commonly agreed framework for measuring, and enhancing, development and progression in the mastery of writing among school-aged children.

The project was funded by the Northern Ireland CCEA. 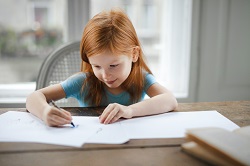 The aim of this project was to research and review existing knowledge about the nature of progression in writing. The key source of evidence for this undertaking was research worldwide on literacy (specifically writing) development. A secondary source of information was the range of progression frameworks developed in other countries, although we recognise that many of these were not derived from research and hence have to be treated circumspectly.

The phases of this literature review were as follows:

A copy of the final report from this project can be downloaded from here.